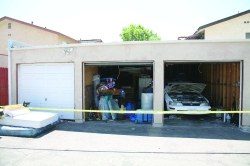 Rowland Heights – On Mon., Aug. 4, the L.A. County Sheriff’s Department’s (LASD) Major Crimes Bureau became involved in a kidnap for ransom case. LASD reported that the victim, a 44-year old female, had been forcibly kidnapped in the Rowland Heights area and a ransom demand of $110,000 for her safe return had been made to a family member. The caller indicated that the victim would be harmed or killed if the ransom was not paid.

Detectives obtained a search warrant for the location and on Wed., Aug. 6, at approximately 9 a.m., the warrant was served. Detectives discovered the victim, who was bound and hidden in a dark, cluttered garage at the location. One of the victim’s captors, suspect Francisco Inacua, 34, who was guarding her at the time of the encounter, was immediately arrested. The victim obviously dazed and traumatized by the ordeal, emerged from the garage in tears, hugging one of detectives that had rescued her.

Quickly following the rescue of the victim and the arrest of Inacua that same day, Detectives arrested Inacua’s sister, suspect Rocio Inacua, 32, and Rocio’s common-law husband, suspect Uziel Figueroa, 32, for their active involvement in the kidnapping of the victim. Ironically, it was Francisco Inacua, (whose wife, suspect Judith Maldonado, 40, had befriended the victim while the two worked together for quite some time at a factory in the City of Industry) that had offered the victim a ride home following work after the victim had missed the bus.

While driving the victim toward her home, suspect Francisco Inacua – who had coordinated the kidnapping with the other suspects – pulled into a restaurant parking lot and exited the vehicle, while suspects Rocio Inacua and Uziel Figueroa kidnapped the victim at gunpoint, forcing her to the floorboard of the vehicle. She was driven to the garage, bound and blindfolded by duct tape, and kept in squalid conditions until her rescue two days later.

Suspect Judith Maldonado was arrested the following day, and all of the suspects have admitted their role in kidnapping the victim. The motive appears to be for financial gain only. The suspects were charged with kidnapping for ransom and conspiracy to commit kidnapping, and remain incarcerated in lieu of $2 million bail. All four suspects are residents of Rowland Heights.