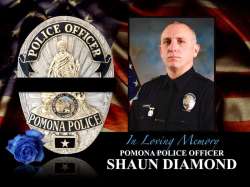 The Pride Run is a traditional event that occurs at the conclusion of a law enforcement recruit officer’s training at the Sheriff or Police academy.  It typically marks the final physical fitness exercise for the class.

Diamond – a 16-year veteran in law enforcement and a member of Pomona’s SWAT Team – was assisting in the service of an allegedly gang-related search warrant in San Gabriel in the early morning hours of Oct. 28 when he was shot from behind (from inside the house).  He was transported to the hospital in critical condition.  He succumbed to his injuries the following day.

Officers participating in the Pride Run did so with a heavy heart and a great sense pride, not only in their own accomplishments, but in remembrance and honor for their friend and colleague, Officer Diamond.