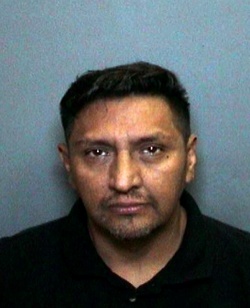 Santa Ana – On Fri., Aug. 14, at approximately 11 a.m., Santa Ana Police Detectives arrested Ruben Olguin, 51, of Santa Ana, for Lewd Acts with a Child. Olguin was arrested from his place of employment, the Salon De Belleza Nuevo Guadalajara, located at 118 E. 4th St. in Santa Ana.
According to the SAPD, this past July, a 14-year old victim and his mother went to their usual barber – Olguin – at the Salon De Belleza Nuevo Guadalajara. The victim and his mother had been to the same barber several times and trusted him. Olguin took the victim to a private location in the back of the Salon to wash and shampoo the child’s hair. There, it is alleged that Olguin molested the victim while the mother waited in the front of the store.
Olguin is currently being held at the Orange County Jail with bail set at $100,000.
Due to Olguin’s access to children and the public, the SAPD is asking for the public’s help in identifying any additional victims or witnesses who may have observed him acting inappropriately.
Anyone with information is encouraged to contact Detective Corporal Javier Aceves at (714) 245-8542 or Orange County Crime Stoppers at 1-855-TIP-OCCS.