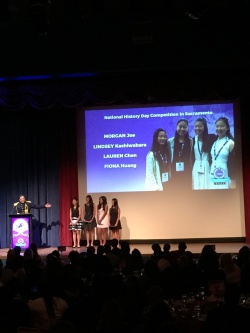 Recently, another South Pointe top team that competed during the L.A. County and California History Day events received accolades for their outstanding work.

Lauren Chen, Fiona Huang, Lindsay Kashiwabara, and Morgan Joe were honored for their documentary on the “Harlem Renaissance: A Revolution of Music and Literature.”

While conducting research, the girls had a unique opportunity to interview the Black Chamber of Commerce of Orange County president, Bobby McDonald.

He was so impressed with their professionalism and curiosity about the Harlem Renaissance that he requested to see their final product.

Upon viewing the documentary, he was thoroughly impressed by both the quality of the video and the depth of their research.

“He was moved by the fact that students chose to honor Black History and thought it was appropriate to pay tribute to them at the annual banquet,” explained social studies teacher Kevin Duh.

The group of girls, who are now 9th graders, spoke to the crowd of 500 guests during the celebration held at the Disney Hotel on August 20.

Each team member received prestigious county and the state awards.

Additionally, the Black Chamber of Commerce of Orange County presented a generous $500 scholarship to each student.

“I am incredibly proud of how each member of the group invested their time and energy to a historical event that is rarely discussed in the classroom. Lauren, Fiona, Lindsay, and Morgan went above and beyond in their project to highlight and honor African American’s contributions to art in pop culture of today. Their work ethic and dedication to excellence is rare to see at this age,” Duh said.