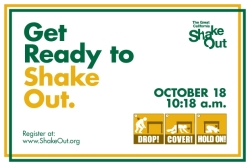 All citizens, businesses, and communities in the Inland Empire encouraged participate

California — Following FEMA’s “National Preparedness Month” in September, individuals and communities throughout the Inland Empire and California will participate in the Great ShakeOut earthquake drill.

Held annually on the third Thursday of October, the International ShakeOut Day is set for Thursday, October 18, 2018.  During the self-led drill, participants practice how to “Drop, Cover, and Hold On”.  Endorsed by emergency officials and first responders, the safe response to an earthquake is to:

DROP where you are, onto your hands and knees. This position protects you from being knocked down and also allows you to stay low and crawl to shelter if nearby.

COVER your head and neck with one arm and hand

HOLD ON until shaking stops

The April 2015 M7.8 Nepal earthquake and M8.3 September 16, 2015 earthquake near Illapel, Chile serve as reminders that large earthquakes can occur with little to no warning.  Citizens in the central U.S. are not immune to earthquakes—the region is home to several active seismic zones capable of producing damaging earthquakes, including the New Madrid and Wabash Valley Seismic Zones.

According to a FEMA Spokesperson, “While damaging earthquakes here may be fewer in number when compared to other areas, they can occur at any time wherever we work, live, or travel within the region and beyond.  Everyone, everywhere should know how to protect themselves from an earthquake.”

The ShakeOut is free and open-to-the-public, and participants include individuals, schools, businesses, local and state government agencies, and many other groups.  To take part in the ShakeOut, individuals and organizations are asked to join the drill by registering to participate http://www.shakeout.org. Once registered, participants receive regular information on how to plan their drill and become better prepared for earthquakes and other disasters.

To date, 2.4 million people are registered to participate in this regional event, however Great ShakeOut Earthquake Drills will also occur throughout the nation and in several countries worldwide.  More than 35 million people around the globe are expected to participate; and in addition to safety drills, many participants take extra steps to become more prepared for earthquakes or other disasters.