Industry – Unison Supply carries only the best irrigation and landscape supplies and materials, priding themselves in providing the best service in the industry.

“Our goal is to make sure each customer feels and understands they make a difference to us,” said Vanessa Acosta, CEO/President, who manages the overall operation and resources of the woman Owned Corporation.

Unison Supply strives to set up professional partnerships with their clients and the community that we serve, Acosta added. “From the time a customer walks in to the time they leave they will feel like they are the only person on our schedule for that time.”

You can find top quality products and equipment for any size job big or small. For those big jobs they have layaway plans or easy financing to fit an array of budgets. They take great pride in making it your one stop shop for whatever the need is. They are an officially approved, certified dealership for Toro and Stihl products.

Customers will enjoy the reasonable prices and the friendly, knowledgeable, expertise of the staff and management. “We are planning to open a repair shop in the very near future,” said Acosta. For their local customers they offer free delivery within 30 miles.

Unison Supply is conveniently located on Valley Blvd near Hacienda Blvd. They are open to both Residential and Commercial Wholesale clients. Feel free to pick up materials in your own vehicle or take advantage of the delivery service for any size load to the entire community. Until December 2018, they’re offering 10% off your total purchase if you check into Yelp and leave a review.

You will be able to choose from the largest selection of landscape materials & supplies in the San Gabriel Valley. The sheer amount of choices a client has will give them their best chance of finding exactly the right tools and materials for any job without having to go elsewhere.

Walnut – A man was killed by a freight train on the border of Walnut and City of Industry last week.

On Saturday, May 7 at about 7 a.m., a Union Pacific train approached a man on a set of train tracks near Lemon Avenue and Lycoming Street.  The personnel conducting the train sounded the horn and applied the brakes, but the train could not stop in time, according to the LA County Sheriff’s Department.  The train hit the man and he was pronounced dead at the scene.

The man’s name or age has not been released.  An autopsy will be conducted by the Los Angeles County Department of Medical Examiner-Coroner.

Anyone with information regarding this incident is encouraged to contact the Industry Sheriff’s Station at (626) 330-3322.

SGV – Over the course of the year, a male Hispanic suspect burglarized several churches in the Industry and Walnut/Diamond Bar Sheriff’s Station’s areas.  The churches had fixed post surveillance cameras which recorded the suspect at the locations, and he was described as having “tribal band” tattoos on both legs and large tattoos on both arms.

According to the L.A. County Sheriff’s Department, the suspect entered churches, stealing large amounts of cash from locked donation boxes.  The burglaries occurred during the day when the churches were open to the public.

Detectives from two stations worked diligently to identify the suspect – who appeared responsible for all of the burglaries – but were unsuccessful. Special Bulletin flyers were distributed to local police agencies seeking additional information and assistance in identifying the suspect, but he remained unidentified.

On July 2, Heard conducted an interview with television and radio media personnel at the Industry Station. Shortly after the interview, and after the suspect’s photograph was televised and posted on media websites, anonymous community members identified the suspect as Hacienda Heights resident, Carlos Montiel, 36.

Heard immediately queried Department resources and confirmed the suspect’s identity. Industry Deputies conducted surveillance on the suspect’s location, positively identified him, and arrested him without incident.

Detectives authored a search warrant for Montiel’s residence and his vehicle to recover evidence related to the crime.

The collaboration of the Detectives from Industry and Walnut/Diamond Bar Stations, Sheriff’s Information Bureau, media personnel and the community, led to the successful arrest of Montiel.

Deputies seize over $3 Million in Marijuana 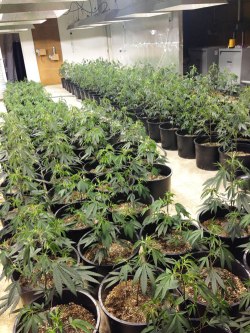 Industry – On Wed., July 1, Special Assignment Team Deputies from the Industry Sheriff’s Station – in collaboration with Narcotics Bureau personnel – arrested two individuals for cultivation of marijuana for sales.  Deputies developed leads based on an anonymous tip, ultimately leading them to the service of a search warrant in the 1300 block of Darius Court in the City of Industry.

During the search warrant, hundreds of marijuana plants in various stages of growth, with an estimated street value worth over $3 million, as well as hydroponic equipment were recovered.  The equipment was used to cultivate the plants inside an otherwise nondescript local business/warehouse.

Deputies arrested David Nguyen, 32, and Phong Nguyen, 54, for cultivation and sales of marijuana.  The suspects are both of Vietnamese decent, and claimed to be from out of the state/country with no local residence.  Both are being held at the Industry Station jail with bail set at $50,000 each.

According to the L.A. County Sheriff’s Department, this is the second such incident of marijuana being grown indoors locally in as many months.  On June 6, the Special Assignment Team from the Industry Sheriff’s Station – accompanied by Detectives from the U.S. Marshals Fugitive Task Force – arrested three individuals for cultivation of marijuana for sales.  In that case, Deputies seized over $1.5 million in marijuana during a local search warrant operation. 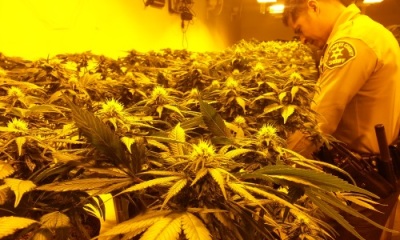 City of Industry – On Tues., May 12, Deputies and Narcotics Detectives assigned to Industry Sheriff’s Station conducted a search warrant in the City of Industry, discovering and seizing a large marijuana grow within a warehouse.

Deputies arrived at the location on the 18000 block of Railroad St., along with members from the Los Angeles County Fire Department in response to a fire alarm call for service.

According to the Industry Sheriff’s Station, Deputies smelled the overwhelming odor of fresh marijuana upon arrival, and saw various items used in cultivation, including lights, chemicals and more.  A search warrant was obtained and Deputies later discovered three separate rooms containing over 300 plants in various stages of maturity with an approximate street value of over $1.2 million.

Deputies have arrested an Asian male in his late 40s, associated with the indoor grow. His name is being withheld pending further investigation.

This investigation is ongoing.  If you have any related information, please contact Industry Station Narcotics Detectives at (626) 330-3322. If you wish to remain anonymous, call “LA Crime Stoppers” by dialing (800) 222-TIPS (8477), texting the letters TIPLA plus your tip to CRIMES (274637), or using the website http://lacrimestoppers.org.

The pursuit took place when the suspect was allegedly driving a stolen vehicle, according to local reports. The driver crashed the vehicle into another car at the intersection of Peck and Rooks road in City of Industry. NBC News states that he then ran into a nearby residential area and entered a home. It is unknown whether there was anyone inside the residence.

Reports state that homes in the surrounding area were evacuated and Police were in a standoff until 9 a.m., when the man surrendered to the deputies. One victim was hospitalized after the crash, but the victim’s condition is unknown.

If anyone has any additional information regarding this incident, please contact the Los Angeles County
Sheriff Department at (909) 595-3649. 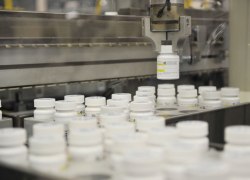 Industry – A lawsuit has been filed in federal court issuing an injunction to shut down Health One Pharmaceuticals, a manufacturer of dietary supplements based in the City of Industry.

The firm and its President, Richard S. Yeh, have agreed to shut down and stop production of adulterated and misbranded dietary supplements and unapproved new drugs in an effort to resolve the lawsuit as part of a consent decree.

According to the Department of Justice’s Acting Assistant Attorney General, Joyce R. Branda, “Protecting the health of American consumers is some of the most important work we do.  We have an unwavering commitment to ensuring that the dietary supplements in this country are safe and have been manufactured in accordance with federal law.”

Based on the results of FDA inspections, the suit alleged that Health One Pharmaceuticals violated laws in the preparation, packaging, and labeling of certain drugs that do not meet regulations required by federal law, and they have failed to conduct at least one appropriate test or examination to verify the identity of every dietary ingredient prior to using the ingredient.

In addition, the complaint alleged that some of the company’s products were unapproved new drugs intended for use in the cure, mitigation, treatment or prevention of disease that are not generally recognized as safe and effective for their intended uses, nor were they the subjects of new drug applications approved by the FDA.  This makes these drugs misbranded, because it is impossible to provide adequate directions for use.

The FDA referred this matter to the Department of Justice for investigation.  The Civil Division’s Consumer Protection Branch, together with the U.S. Attorney’s Office for the Central District of California, filed this case on behalf of the United States.

Architect’s model of the proposed NFL stadium in the City of Industry. (Photo Courtesy: http://www.losangelesfootballstadium.com)

City of Industry – In early 2008, the NFL proposed a new stadium coming to Southern California, slated for the City of Industry. Now, six years later, we seem to be no further along in the process.

In April of 2008, Ed Roski, Jr., the billionaire head of Majestic Realty Co., announced his plans for the $800 million, 75,000 seat stadium, to be constructed off Grand Avenue near the interchange of the 60 and 57 freeways. The location seems ideal for its centralized access to 15.5 million people across four counties, including Los Angeles, Orange, Riverside, and San Bernardino.

Roski’s plan to bring an NFL team back to greater Los Angeles was contingent upon receiving the necessary approvals. After 20 years without a team, the NFL appears to be no closer to returning to Los Angeles other than saying they would like to. Perhaps Commissioner Roger Goodell has his hands full with the recent public relations crisis centered on player domestic/child abuse allegations.

In recent queries to the City of Industry, Senior Planner, Troy Helling, stated that the only actions proceeding on the 600 acre site at this time are the mass grading, landscaping, and installation of the major infrastructure, as part of the former Redevelopment Agency’s obligations – as the State dissolved all such agencies.

“This will in essence create a table top onto which one of two approved projects will be developed in the future [the NFL stadium, and industrial/commercial use],” said Helling.

Local fans will have to continue to focus on their television screens, or travel to Phoenix, the Bay area or San Diego to get a taste of live action football.