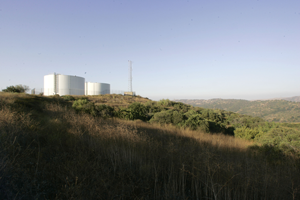 Aerial view of the Madrona Project. (Photo Courtesy: Hills For Everyone)

Chino Hills – The Madrona Project, a proposed residential hillside development under the City of Brea’s jurisdiction, is the subject of much controversy with a lawsuit brewing in its core.

The 367 acres situated in the hills north of Carbon Canyon Road, moving eastward to the San Bernardino/Orange County line is expected to incur development of 162 homes in an area wrought with environmental and safety issues. In fact, the group that founded the Chino Hills State Park – Hills For Everyone – has filed suit against the City of Brea claiming violation of state planning and zoning laws, city codes, and an inadequate environmental report failing to reveal the project’s true impacts.

According to stopmadrona.org, at issue are a multitude of considerations that cannot be mitigated, including repeated wildfires to the area, unsafe geology, dangerous traffic levels, reduced air quality, loss of important habitats, and reduced public safety.

The Madrona Project was first proposed in 1999, and the Brea City Council voted to approve it on June 3 with a 4-1 vote. Notes from an earlier Brea City Council meeting share that the Mayor said he saw three ways that the Council could possibly vote: 1) deny the project; 2) approve the project as is; or 3) approve the project with conditions of approval. The City stands by their approval (with alleged conditions) and the environmental reporting conducted this far.

Many Chino Hills residents are reportedly helping to raise funds for the lawsuit, and have been actively protesting the project from the beginning. The acreage has already burned four times in the last 30 years, and the homes will remain completely surrounded by wild land making the future tenants extremely vulnerable. This, along with the massive amounts of water required to develop the area and sustain future residents in the midst of an historic drought are cause for concern.

The land is also home to an abundance of wildlife in a corridor that has allowed many rare or endangered species to thrive in their own community. By breaking up the continuity of the habitat, many animals could become extinct or have their numbers reduced significantly, not to mention the toll on native plants and all that the biodiversity of the area provides.

Stopmadrona.org says that the Brea council was forced into a legal settlement requiring them to process the project under rules that are 27 years old, but the opted for one-time economic benefits over the safety of its existing and future residents. Former Brea mayor, Beverly Perry, has reportedly said that it [the project] is poor planning and goes against Brea’s long-held values and standards for planning.