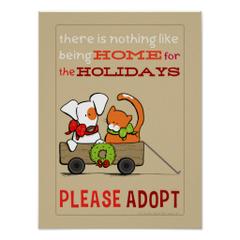 Corona – The City of Corona’s Animal Shelter has teamed with thousands of animal organizations from around the world to participate in an annual pet adoption drive called Home for the Holidays.

The Home for the Holidays pet adoption drive began with a growing concern for the number of rescue facilities closing their doors during the holiday seasons. In seeking the perfect holiday gift, would-be adopters were forced to resort to pet stores or puppy mills. Additionally, pet store staffers, untrained to assess the likelihood of a successful animal/family match, contributed to an increased number of pets sent to shelters once the season was over. The Home for the Holidays campaign asks shelter facilities to keep their doors open and get the word out. The program has grown into the largest pet adoption drive in the world and is credited with saving over 9.3 million pets across the globe since its inception in 1999.

The Corona Animal Shelter will hold two very special adoption events. During the week of the Thanksgiving holiday, November 24, 25, 26, and 29th, the Corona Animal Shelter will celebrate its first event, “Black Friday Week”. The $15 adoption fee will be waived for any animal with any black coloring or markings. Normal Spay and Neuter and Licensing fees still apply. Information for the second event scheduled during the month of December will be released at a later time.