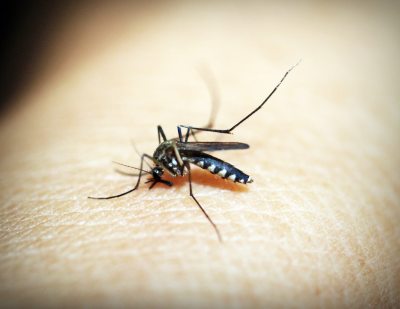 The illness was confirmed this week based on test results and other clinical information. Both patients required hospitalization, thankfully both are expected to recover. There are no indications the two cases are related.

The virus is transmitted to humans and animals through a mosquito bite. Mosquitoes become infected when they feed on infected birds. Health officials emphasized that the risk of serious illness to humans is low. Most individuals who are infected with the virus will not experience any illness. Elderly individuals and those with compromised immune systems are at greatest risk for serious illness.

“While West Nile is rarely life-threatening, it can be occasionally serious,” Kaiser said. “Unlike the common cold which is easily transmitted, the West Nile virus can only be spread by mosquito bites, and there are easy steps to take to reduce your risk of getting bitten.”

Here are some ways to protect yourself:

There were 33 human cases reported during 2017 in Riverside County. In 2016, there were 10 confirmed human West Nile Virus cases in the county and there has not been a death from the illness since 2015.

Anyone who becomes ill after exposure to mosquitoes should contact their health care provider.  The Disease Control office can be reached at 951.358.5107 for more information on West Nile Virus.  For more about mosquito abatement, click www.rivcoeh.org/Programs/vector. To download full press release, click here.

To prevent the West Nile Virus spreading in Eastvale, the Northwest Mosquito & Vector Control District performed adult mosquito spray treatments on Friday, June 29, 2018 to lower the mosquito population affecting recreational and residential areas along the Santa Ana River in the City of Eastvale. The spray application was conducted between the hours of 2:00 a.m. to 6:00 a.m. at the following locations:

The District treated these areas with Aqua-Reslin (EPA Reg. 432-796), which is approved for use in mosquito control by the US EPA.  They have been working hard to use Integrated Pest Management Practices in these areas, and the majority of their efforts focus on preventing mosquito breeding and killing mosquito larvae before they become flying adults. However, due to elevated trap counts, they have decided that adult mosquito control via truck mounted ground fogger is their best means to control the current mosquito populations in these areas. Signs were posted on June 27, 2018 in the areas that will be sprayed to inform the public of these activities.

Information regarding the treatment will be posted on their website at www.northwestmvcd.org. If there are any questions or concerns please contact the District at 951-340-9792.

Frontier Communities
Is your business in need of window cleaning? Contact Aqua Technologies today!
Our Diamond Bar May 2020 print edition is available now at www.anapr.com
Our Eastvale News May 2020 print edition is available to view at www.anapr.com
Congratulations to our Mother’s Day Essay Contest Winner, Will!
Jurupa Community Services District