By Jennifer Madrigal and K.P. Sander 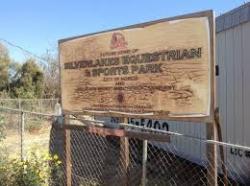 Norco – Silverlakes Equestrian Sports Park, the highly anticipated 122-acre recreational facility that began development in 2007, has hit yet another roadblock. Financing for the park in Norco has been delayed as their latest financial backer has pulled out.

At a Norco City Council Meeting in December, Balboa Management Group Chief Executive Officer, R.J. Brandes, said he hoped construction would begin in early 2014 with the opening occurring six to nine months thereafter. However, at a Feb. 19 City Council meeting, Brandes informed the council that bank officials who had agreed to finance had withdrawn.

Silverlakes Equestrian Sports Park has been eagerly awaited for years and with the grand opening of Eastvale Community Park occurring on March 8, the barren field is even more of an eyesore. Silverlakes will be used for equestrian and sporting events, as well as dog shows, car shows, weddings, corporate and community events, circus performances, camping and more. Once completed, it will also join with nearly 120 miles of biking, jogging and equestrian trails.

The vacant land and unfinished project continue to be a source of controversy for both Eastvale and Norco residents. In a meeting back in October 2013, Norco Planning Commission member, Dave Henderson, and his wife Shirley, made a public presentation providing the facts on Silverlakes. Some key points were: $5.1 million was spent in 2012 when there was not authorization to spend above $3.7 million; water, sewer and road infrastructure were not in place; water/sewer municipal bond money appears to have been used for something else; and inspections were not made. With even more delays and no progress on what is now just vacant land with lots of dirt, many questions of poor planning have been raised.

So, will this project ever be completed? According to Brandes, at least two larger banks are considering financing the project and he is determined not to give up on this project until the deal is done. However, when questioned by Councilman Greg Newton at the Feb. 19 City Council meeting about a timeline for financing and construction, Brandes avoided answering.

According to a 2009 market analysis, Silverlakes (with an equestrian center capable of stabling and hosting world-class events, 25 soccer fields, a stadium field that can seat up to 5,000, an event center and picnic areas) could bring in over $35 million to Norco and attract over 550,000 visitors. These are funds that the City has been eagerly anticipating, especially since $5.7 million in water and sewer bond proceeds have already been released to the developer by the City.

The current situation involving Silverlakes Equestrian Sports Park continues to be waterlogged by a lack of funding, reimbursement legalities and general mistrust, but everyone involved still seems to remain hopeful that eventually the project will be completed.