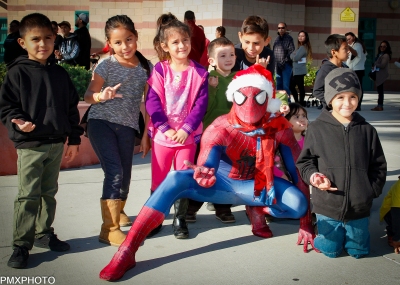 Photo by: Paul Moureaux of pmxphotography.com
Spider-Man swings in for the annual Christmas Gift Mart

Economically disadvantaged families in the surrounded areas were invited to purchase brand new Christmas presents for their children at only $2 per toy. Over 2,300 gifts were available for purchase, which were all donated by VantagePoint Church members. For every dollar that was collected, 100% of the proceeds were given to James T Bostic at God’s Pantry, a food ministry providing for the needy.

“The only reason why we charge for the gifts at all is because there is dignity and pride when a person is allowed to provide for their families,” said Pastor Mark Lee in a Facebook post.

The 470 families lined up at Eleanor Roosevelt High School, wrapping the length of the high school. The very first family in line had been waiting there since midnight, even though check-in started at 8 a.m.

Photo by: Paul Moureaux of pmxphotography.com
A picture of one toy aisle at the Christmas Gift Mart.

Many of the families thought they were only coming to purchase a few Christmas gifts, but VantagePoint Church had a variety of other things planned. Delicious treats were given to the families, Carolers sang Christmas songs, and bicycles and gift baskets were raffled off for free. Children were also able to take pictures with Santa, Santa’s elf, Stormtroopers, Spider-Man, Princess Belle, and an adorable pony. Lastly, children were able to make Christmas crafts and watch movies while their parents shopped in peace.

Over 200 volunteers of every age helped by being personal shoppers, translators, gift wrappers, shopping bag holders, children babysitters, and so much more. Their motto, “Be living proof of a loving God” was indeed shown by these volunteers.

Photo by: Paul Moureaux of pmxphotography.com
Santa and his elf Haley are ready to take pictures with the kids.