Eastvale – On the 20th anniversary of the 9/11 attack, a “Never Forget” monument was unveiled in the City of Eastvale.

Troop 2017 led the presentations of color while Seumas Coyne played the bagpipes. Eleanor Roosevelt High School Band/Wind Ensemble played the National Anthem beautifully. Then Pastor Mark Lee of VantagePoint Church gave a great speech for the invocation followed by the Division Chief who led the moment of silence.

The monument is a 2’ x 2’ by 12’ tall replication of the Twin Towers that sits on an 8’ diameter Pentagon. It is internally illuminated at night in front of the Eastvale Fire Station 27. The pentagon base has the inscription “9-11-2001 Never Forget”.

The monument was created to “serve as a gathering place for the Eastvale commUNITY and visitors from throughout the region, Southern California, and beyond to gather and pay respect to all who were impacted on September 11, 2001,” stated a city news release.

The City of Eastvale, CAL FIRE/Riverside County Fire Department, Riverside County Sheriff’s Department, and the Eastvale Chamber of Commerce all partnered to create the monument. “Jackie Case from Urban Arena facilitated the collaborative design process between the agencies, Giovanni Rotellini from Metal Masterminds fabricated the sculpture, and the Chamber sponsored the ‘Never Forget’ memorial sculpture,” according to the City.

The National Day of Service and Remembrance, also dubbed Patriot Day, is held on September 11th in remembrance of the 2001 9/11 attacks.  Throughout CNUSD schools held assemblies and presentations in honor of the 2,977 people who lost their lives, and the service men and women who sacrificed their lives to help others implemented in the September 11th attacks. Students involved in the boys and girls scouts were asked to wear their uniforms while other students were encouraged to wear red, white and blue to show their respect and support. Students also participated in activities and crafts with their grandparents in order to learn more about the events of 9/11.

Campuses were decorated with flags and posters titled “We Remember” in honor of those to who lost their lives. Some of our secondary schools held assemblies that featured retired service men and women. Students had the opportunity to with speak them, ask questions and learn more about what goes into protecting our country.

While some classes gathered outside their rooms as their choir sang patriotic songs and recited the Official Proclamation from former President George Bush, others told stories of what they were doing on September 11th, 2011. Students also participated in a flag salute and moment of silence led by their principals. 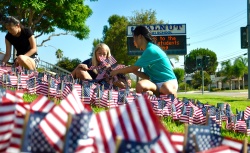 WALNUT, CA- About a dozen Walnut High students are making sure the school community pauses to remember the 9/11 tragedy this weekend.

Volunteers gathered after school on September 9 to place nearly 3,000 American flags on the front lawn to commemorate the 15th anniversary of the terrorist attacks.

They created the 12-foot-tall 911 and pentagon shaped display with the red, white, and blue patriotic markers.

This year, the United Med club spearheaded the 6th-annual project.

“I felt it was important to continue the tradition of the display,” said senior Evelyn Tantry.

For about an hour, the teens carefully pushed the tiny flags into the grass to honor each life lost during September 11, 2001 attacks.

Several cars honked as drivers gave a “thumbs up” sign in appreciation as they drove past the school.

“I want people to remember that innocent people were murdered,” said junior Derek Wang who was just one at the time of the tragedy.

The flags will be on display at the campus located at 400 N. Pierre Road in Walnut through Sunday.

“We want the community to be able to enjoy it,” said social studies teacher Brett Landis.

Where: Eastvale Fire Station 27
7067 Hamner Ave., Eastvale, CA 92880
Time: 6:45 a.m.
Moment of Silence: 6:59 a.m.
Please join our Eastvale Firefighters, Eastvale Police Department, City Council members and staff as they observe a moment of silence in honor of the heroes and victims of September 11, 2001.

To commemorate the 15th anniversary of the tragic events of September 11, 2001, the Eastvale Firefighters and Police Officers will gather together in their work uniform at the base of the Fire Station 27 flag pole and stand at attention during the posting of the American Flag at exactly 0659 hours PST (time of the collapse of the south tower). The Eastvale safety personnel and all in attendance shall observe a one-minute moment of silence.

Let us come together as a community for the 15th anniversary of 9/11 to honor, remember and reunite. This event is open to the public and citizens are encouraged to attend. Coffee and donuts will be available after the ceremony.