Eastvale – It was announced on Aug. 12 that Councilmember Joe Tessari will resign from the Eastvale City Council. “Joe and his wife Lanee are off to start a new adventure in the State of Texas,” stated the City.

Joe has made a huge impact on the city as a member of the City Council, Planning Commission, and he was a proponent of Eastvale’s incorporation from the beginning. He served throughout the City, first one of the City’s first Planning Commissioners until August 2014. He was then “appointed to the Eastvale City Council in August 2014, re-elected in November 2016, and continued to serve until today,” stated the release. “He also served as Mayor in the City of Eastvale in 2017.”

As a volunteer, he served as a Board member and Club President for the Eastvale Kiwanis Club for over 7 years. Tessari helped champion the Roadway Adoption Program, along with several other charitable events in our City.

“We wanted to take a moment to thank Joe for all that he has done for our community,” stated the City. “Best of luck to Joe and Lanee on their move to Texas. We’ll miss you!” 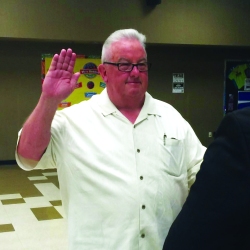 Photo courtesy: City of Eastvale
Richard “Dickie” Simmons was sworn in at the Eastvale City Council meeting on May 11.

Eastvale – Richard “Dickie” Simmons was appointed as the newest Eastvale City Council member on May 11.

After Council members interviewed 10 candidates in order to fill Councilman William “Bill” Link’s vacant seat, Simmons was appointed with a 4-0 vote and was sworn in immediately.

Simmons, 67, is a community activist and volunteer that served as a field deputy for the County of Los Angeles Board of Supervisors for 17 years. Simmons also served in the U.S. Marine Corps and with the Los Angeles Police Department. However, Dickie is well known for his presence in the Inland Empire. He moved to Eastvale in 2002 and was so active in the Eastvale community that he was known as “Mr. Eastvale”.

With the resignation of Link in March, the Eastvale City Council opened up the “appointee process” last month. Link resigned because he moved out of the city, according to City Hall.

“The appointee will serve until this November 8th election,” said Mayor Ike Bootsma. “Then voters can choose a new city council member to serve the final two years of Bill’s (Link) term.”

This is the third time in 5½ years that the council appointed someone to replace a council member who resigned.

The council decided not to hold a special election because it would cost taxpayers over $60,000 to do so, according to City Hall. The earliest an election could take place would be August, so it makes sense to wait until the general election in November.

All appointees were required to be registered voters living in Eastvale. Each candidate gave a two-minute statement and was asked predetermined questions.

This article was updated by Eastvale News staff.